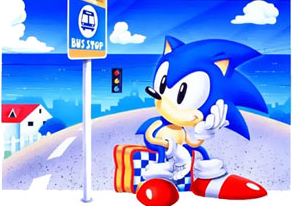 Developers are indeed taking notice of Rockman 9's success: Konami has previously expressed an interest in creating a retro styled Castlevania, the popular Cave Story is seeing an enhanced 8-bit port on Wii and now Sonic Team is looking at the possibilities of a new 16-bit Sonic.

Nishiyama: "There's always the possibility. Whether it would be viable remains to be seen, but having a new game - or even a remake of the GBA games, which we now can't use [thanks to the DSi] - would certainly be possible. If we made one, would you buy it?"

Nishiyama: [laughs] Great! One of our ideas has been that on older consoles, you may have had only 16 colours. One thing we could do is make a game like Mega Man 9; do a new Sonic, but in an old style."

Props to SEGA for even considering this. I know I'm not the only one disappointing in Sonic for the past decade. A 2D/retro Sonic title would definitely makeup for all the crap we've had to put up with as of late (Shadow, Princess Elise, unnecessary crappy friends and the Werehog).

Isn't it amazing how a single game manages to continuously inspire an entire industry? Rockman 9, a title that daringly presented its 8-bit self to a over-saturated "1080P, high definition, dark and gritty, FPS" market, is paving the way for simplistic/retro games. That's just simply amazing.