What Exactly Is the "Rockman X3 Buster Battler?" 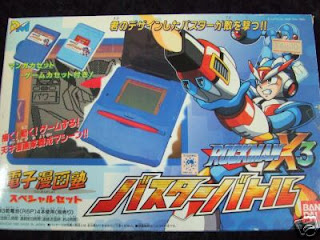 Every so often, a mysterious Rockman item pops up on ebay known as the "Rockman X3 Buster Battler", a seemingly over sized LCD handheld game.

For the longest time, myself and a few buddies have pondered what the device does. Is it actually a full fledge game in vain of the Tiger handhelds? Some sort of precursor to the Leapfrogs? Thankfully, the winner of the most recent Buster Battler auction has generously shared some details about the item in question:

"The game has 2 different carts:

The first one is the game cassette (cart). You choose between regular X, full-armored X, and Zero, then you insert several parts into them (it doesn't tell you what they do on their own, at least not ingame that I saw). It scans them when you're done and gives your character stats based on them. Then it lets you choose 2 busters. You draw the busters yourself and it scans them to determine their stats (there are buster stamps if you want a base to work with). You can have up to 4 different busters saved. They you get to choose to fight against a boss, such as Vava (Vile). You choose one of four directions to attack (3 attacks) and you essentially hope that the boss moves in the direction you picked. You can also do things like charge your buster for a wider, more powerful shot, and power up your buster to increase it's attack. I haven't spent enough time with the game yet, so there may be more to the battles than I've figured out so far, and there were other game modes I haven't tried yet, too. Plus, I think you can connect 2 of them together to play a versus mode, or something like that.

The other one is the manga cassette. Basically, it has a few blank pages that you draw your own flip-book story of sorts. You can draw it all by hand, or you can use X3 related stamps and backgrounds to make your own little story. You can also make your own 3 X 3 slide puzzle game.

Wow. How did something like this go unnoticed for so long?

If the item pops back up on ebay (it frequently does), I'll be sure to give you guys a heads up.

Posted by Protodude at 2:00 AM