Not much else more to say than that! If you're a subscriber, boot up your Switch and give this one a spin! It's one of my all-time favorites.

In addition to the ten games above, Mega Man Battle Network Legacy Collection also features optional high-resolution filters that allow PET owners to enjoy smooth visuals or revisit the original pixel art that helped define the style of the original games. Plus, over 1,000 pieces of art are included in the Gallery, spanning concept art, character sketches, and official illustrations. The additional “Mystery Data” section also includes unique illustrations and images of licensed goods, and the Music Player offers over 180 tunes for you to rock out to when you and your NetNavi aren’t busy exploring Cyberspace.
Mega Man Battle Network Legacy Collection launches in 2023.
Posted by Protodude at 8:15 AM 30 comments: 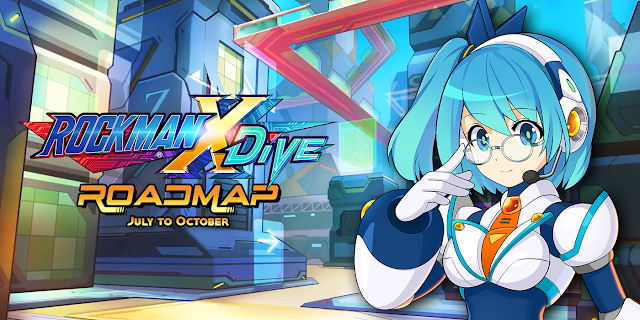 Rockman X DiVE is in the middle of a quiet period with no additional characters. Since the distribution of Dr. Light The Martial Artist on June 8, the game has seen a share of reruns. These include the Bridal event, the 2020 summer event and the 2021 summer event this week.

Obviously, fans of the game are wondering what's coming next. To that end, the development team took to social media today to provide a look into the next few months of content. In the midst of the X-Hunters event, the global version of Mega Man X DiVE shows no signs of giving players a rest. More characters are coming to the game next week.

While the Asian version released RiCO to celebrate its first anniversary, the global version won't be waiting for its respective anniversary milestone: RiCO's gacha capsule will be available in the NA server next Wednesday. The capsule comes packed with a single free 10-pull.

RiCO's first active skill is Data Recreation, which allows her to deploy an information window to pull a random skill from either Ultimate Armor X (Plasma Charge Shot), Awakened Zero (Genmu Zero) or Iris (Peaceful Wish).
Her second active skill is Data Analysis, which deploys a force-field that inflicts damage and absorbs energy from an enemy. What's more, one of her passive skills will "randomly remove a buff when hitting a target with your weapon attack"

The event stage "ViA's Deep Log Training" will be available at a later date.

When it comes to the EU server, they are getting Bass.EXE GS and the LATAM server will get Sigma (X4 2nd Form). Both capsules include a single free 10-pull too. 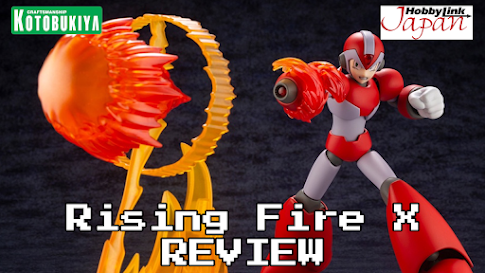 When Kotobukiya's Mega Man X Fourth Armor Rising Fire Ver. was announced, it was accompanied by the kit above: Mega Man X Rising Fire Ver. While on the surface it may appear to be an X recolor, it does bring its own flavor to the table. Besides, X having recolors is a huge part of the games in the first place, right? After the break, let's see what makes this kit more than just a simple recolor. 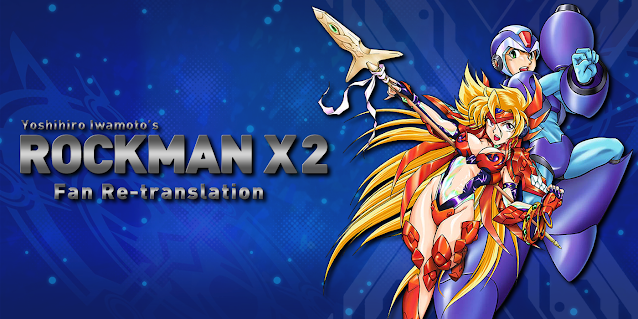 Hot on the heels of the Rockman EXE: Operate Shooing Star VS English translation, Azure Wind Productions finally completed the re-translation of Yoshihiro Iwamoto's Rockman X2 manga. The project took four solid months of hard work.
To date, Azure Wind productions successfully re-translated a number of manga. These include the Rockman X1 and Rockman X4 volumes, two previously untranslated chapters from the Rockman X3 manga (Mars and Ikaros) and the extra story "Holiday". The later is a story that was drawn and included in the 2005 reprint as a bonus.
That's all when it comes to Yoshihiro Iwamoto's Rockman X manga. But if you're a regular of Rockman Corner, you already know that Azure Wind translated the highly-regarded The Men Who Made Rockman, among other works.
While you wait for Azure Wind's eventual X3 re-translation, you can read the Rockman X2 manga, and all their translated works so far here!
Posted by Reploid21XX at 10:10 AM 1 comment: 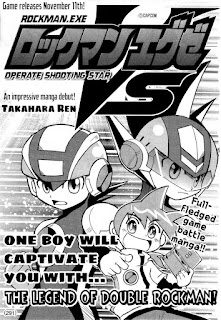 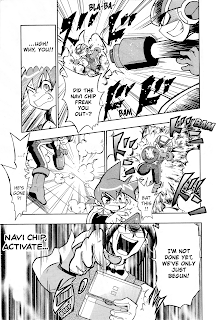 Unlike any previous Rockman EXE manga, this short story takes place in the real world - the one we live in. It focuses on Amino Raito, a young boy who is determined to come out on top against a mutliplayer Operate Shooting Star battle with his rival Mieharu. The 32-page story is essentially a promo for the game, really. You won't find any kind of Takamisaki-style high stakes here.

All in all, it's an interesting, if not obscure commodity. Head over to Esspresso Scans here and check it out!

Posted by Protodude at 7:38 PM No comments:

The leader of the X-Hunters is coming to all servers on the global version of Mega Man X DiVE next week. He started life as a collectible figure; and now,  χ-kai- will be playable! He'll be available from the gacha starting next Wednesday.

He shares gacha capsule with the Arc Cracker, a weapon based on Violen, one of the X-Hunters from Mega Man X2 and the A rank sprayer Virus Sprayer.

χ-kai-'s first active skill is "Charge Shot -kai-" which shoots an energy round that can invert the target's horizontal movement. It can even recover a portion of health.
Multi-Chasing Laser is his second active skill. It's an attack that launches, well, multi-chasing lasers. One passive skills allows him to gain a shield that grants invulnerability when in use.

What's more? During the next two weeks of X-Hunters event players can get the X-Hunters card and enough memories to unlock the Virus Sprayer.

You can watch the official trailer here!

It's no secret that some characters in Rockman X DiVE were distributed without voices because they lacked spoken dialogue in their original games. And in some case, like Iris, Forte and Ciel, intended recording sessions for new voiced lines were impacted by the COVID pandemic. Many were put on hold.

Iris received voiced lines in July 2020. Forte and his many iterations followed only a week ago. And now, it's finally time for Ciel to stop being mute because her original voice actress, Rie Tanaka, is back to voice her!

The last time Rie Tanaka was involved in the franchise was during the promotion of the Mega Man Zero/ZX Legacy Collection. She released a new version of Rockman Zero 4's ending vocal track, Freesia, and made a guest appearance in Capcom TV.

Ciel's voice will be implemented this Wednesday. Meanwhile, "Valentines Day Ciel" and "Christmas Ciel" will follow suit on June 29. You can check a preview of the new voice lines here! 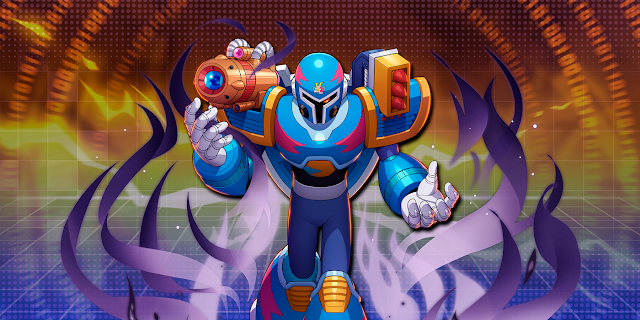 Coming up next week on the global version of Mega Man X DiVE, Vile MK-II arrives to the NA and EU servers. The gacha banner features the limited launcher Absolute Freeze based on Blizzard Wolfang from Mega Man X6, too. Players can also get up to 7 days of free daily 10-pulls by participating in the following social media campaign.

His second active skill is Flame Round which shoots a flame round with a knee cannon to inflict damage.

What's more? The NA and EU servers will get the Singularity Slasher gacha capsule. The limited saber is based on Omega's first form in Mega Man Zero 3. The banner will yield a guaranteed S rank weapon in the 1st, 3rd and 5th 10-pull.

Lastly, the LATAM server moves to the second week of the Street Fighter event which brings Akuma to the game!

No less than a day after data started popping up on the Microsoft Store, Capcom officially announced Capcom Arcade 2nd Stadium. The collection boasts 32 classic arcade games including Mega Man: The Power Battle and Mega Man 2: The Power Fighters.

Much like the previous collection, Arcade 2nd Stadium games feature online leader boards, a variety of display and filter settings, a rewind feature and the option to turn on invincibility. Games can be purchased individually for $3.99 or $39.99 for all 32.

Capcom Arcade 2nd Stadium is slated to debut worldwide on July 22nd for Nintendo Switch, PlayStation 4, Xbox One and PC/Steam. 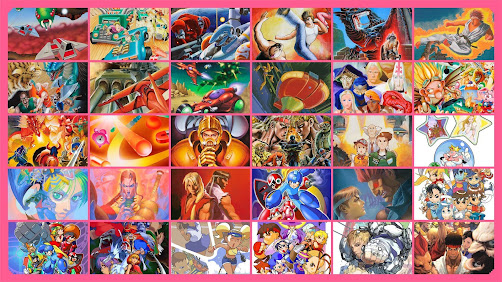 Although not outright confirmed, it appears that both Mega Man: The Power Battle and Mega Man 2: The Power Fighters are headed to Capcom Arcade 2nd Stadium.

Twitter user @Alumia_Italia, who regularly keeps tabs on backend data from the Microsoft Store, found images for several games slated to appear in Bundle 1. Chief among them are Power Battle and Power Fighters.

Pending official word from Capcom, we can't say for certain they're in. But, honestly, it wouldn't be totally unexpected. Perhaps we'll learn more during Capcom's Summer Showcase next week.  The event is expected to feature news and updates on previously announced titles. 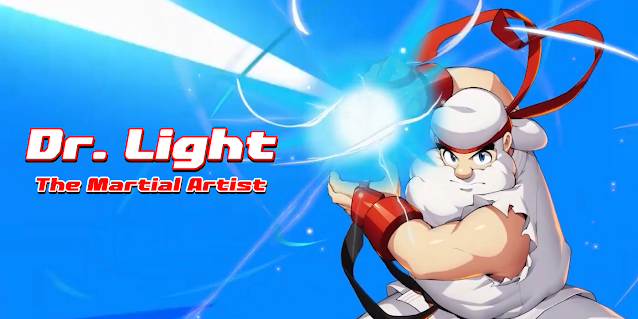 Last week was a bit of a break in terms of new characters. But this week, Rockman X DiVE is back in full force with someone you already know because it was leaked by Capcom Taiwan a short while ago.

That's right -- "Dr. Light the Martial Artist"  joins the game this Wednesday! Find all the details after the break! The Global version of Mega Man X DiVE celebrates a new DiVE Festival in the NA and EU servers next week. What's more, the Core Chip Recycling Campaign event is back and the LATAM server finally gets the Street Fighter Collaboration!
Find all the details after the break!
READ MORE>>>
Posted by Reploid21XX at 8:47 AM 3 comments: