The Mystery of the Lost Command Mission Gashapon Figures 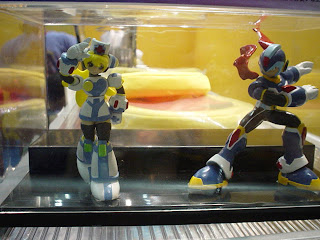 Way back in 2004, Capcom showed off a wide variety of Rockman merchandise at the "Summer World Hobby Fair." As usual, the .EXE merchandise was the center of attention, however, a particular display deserved just as much: the Rockman X Command Mission gashapon figures.

Presumably developed by Takara (now Takara-Tomy), these collectible gashapon figures were planned to release shortly after Command Mission's domestic debut, but ultimately, the figures never saw the light of day and went off the radar.

So, what happened to them? No one knows for sure, though I have a few good educated guesses:

-Capcom was more prone to the idea of investing in EXE merchandise production. 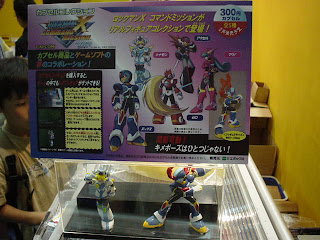 Still, these would have been a great asset to anyone's Rockman collection. If I'm not mistaken, these figures were molded to resemble the poses of the in-game collectible action figures. Now that's just awesome.

And yet a sole Command Mission figure exists, though not as precise as the ones displayed above. JazWares Inc. briefly produced an articulated Stealth Armor MegaMan X figure. Thankfully, the figure is quite common in online stores, so those interested can easily pick it up.
Posted by Protodude at 3:27 PM