RUMOR: 'SEGA vs. Capcom' To Be Revealed At TGS 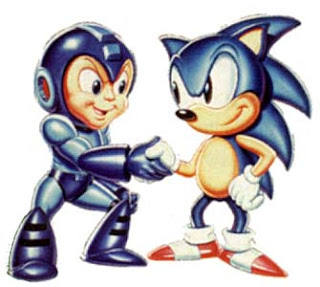 Earlier today, I received word from an anonymous source that both Capcom and SEGA are set to unveil a cross over title during the Tokyo Game Show festivities dubbed, "SEGA vs. Capcom: Great Clash Generation."

The game is described as a "hybrid RPG-fighting game" coming out on the Nintendo DS in Q1 2009 with a "likely" PSP port later in the new year.

SEGA is apparently heading the game's development alongside Dimps. Capcom however will take on the role of supervisor.

Anonymous did not have any knowledge as to who would make up the character roster, but did mention that Rockman and Sonic's presence were a given.

We'll find out if this rumor holds any truth later this week, TGS is set to begin Thursday, October 9th.

Thanks Anon
Posted by Protodude at 2:00 AM