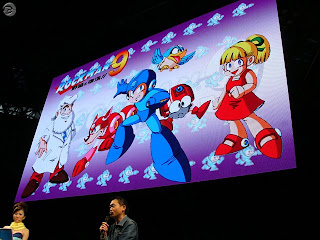 This years TGS was certainly underwhelming for Rockman fans, but nevertheless, there were a few notable events that took place that went unmentioned until today. Here's the Rockman lowdown courtesy of Gpara and Dengeki Online:

-Keiji Inafune made a special appearance Friday to talk about Rockman 9. The game was done as a "gift" for Rockman fans who've supported the Blue Bomber for the past 20 years (awww). Developing RM9 was a bit daunting on the developers, many were left confused on how to create a game that had intended restrictions such as color, sound and numerous mechanics. Nevertheless, they pulled through.

-Inafune expressed how satisfied he was with the game's sales.

-Commented on Rockman's "charm" through other forms of merchandise such as T-shirts and soundtracks (Inafune's actually wearing a RM9 Tee. DO WANT).

-Inafune expressed his great respect for Blues. This respect led to him being included as a playable character in RM9. Expressed his desire to create more "rivals."

-Shooting Star Rockman series producer Takeshi Horinouchi joined Inafune at the stage. There, he expressed his desire to target the series at young boys for lasting appeal. He briefly touched on the subject of Rockman's new design. The change was done in an effort to reflect the player's actual growth. 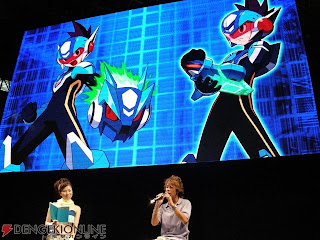 -Horniouchi discussed a few SSR3 related items such as the Noise Modification Gear (allows players to "create" their own Rockman) and promoting the game through the comedic duo, "The Bearded Barons" boy band, "Kick Chop Busters" and an upcoming animated commercial.

-Hornicouhi expressed his wishes to keep creating Shootig Star games once a year in an attempt to "reflect the players growth with the game's characters."

-Finally, Inafune expressed his great desire to create Rockman DASH 3. Inafune is well aware of the many fans who want to see a return to the series, thus he encourages these fans to continue to support the title in hopes of finally being able to produce it. Thanks to Rockman 9's success, a DASH3 is certainly a possibility, but Inafune needs our support!