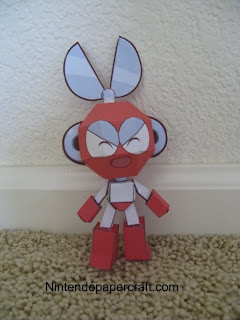 Courtesy of Nintendo Papercraft, we have ourselves a delightful chibi Cut Man. Nifty! The best part is, the papercraft comes with it's own back story:

"General Cutman comes from an Alternate Universe, where he was the original DLN-003. After he was implemented an experimental genius chip, his IQ raised to unmatched levels (towering above 200), and started to be perceived by Doctor Wily as too dangerous. During Wily's attempt to shut the rebellious robot down, Cutman escaped, severing Wily's arm in the process, and was never heard of until a few years later."

Papercrafters shouldn't pass this one up, it offers quite a challenge! Download it here.
Posted by Protodude at 4:30 PM