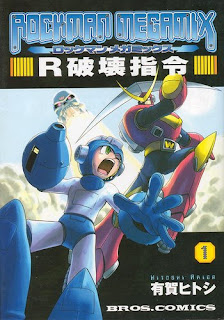 Thanks to all who sent this one in:

Hot off the heels of the Inti Creates event, Hitoshi Ariga announced plans for a new Rockman publication: "Rockman Maniax."

Ariga was very hush hush on what exactly Maniax is, but he assured the crowd that future details will appear on his official blog, on December 17th, 2008 (Rockman's 21st birthday).

*UPDATE*
A little more information about Maniax has surfaced.

Maniax will act as a compilation of Ariga's Rockman fan art; stuff that predates his work on Rockman Megamix and Rockman Remix. Ariga previously shared these works in reprinted editions of the Megamix, but has never been conveniently collected into a single book until now.