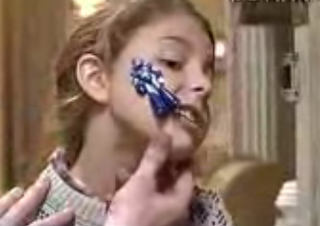 Yesterday, my “date” forced me to sit down and watch “Just My Luck,” a 2006 chick flick starring everyone's favorite train wreck, Lindsay Lohan. I was thrilled to say the least. (sarcasm)

Anyway, I was bored out of my mind until a certain scene caught my interest:

Approximately ten minutes in, we are introduced to “Kate” a young girl who has a very familiar toy glued onto her face: MegaMan X (Jazwares 3'' figure to be precise). Kate blames the act on a bunch of fourth grade boys who clearly did it for the lulz.

Her cousin, "Jake", eventually comes to her rescue and removes X with the magic of rubbing alcohol. Best scene of the entire movie.

Just goes to show you, even chick flicks may contain MegaMan cameos.
Posted by Protodude at 3:49 PM