Get Equipped With Awesome Halloween Costume 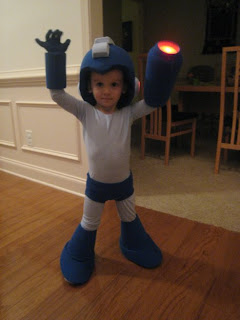 Cranieum has finally completed his three year old son's MegaMan costume and man, does it look great. So, how much effort really went into this? The lowdown:

Helmet:
"This took about 15 - 20 hours. I got respect for the hot glue gun as I received several burns and blisters from it. The Cars bike helmet was $20, frisbee free. LED's/electronics were about $10. The foam/fabric was from Goodwill type places and were about $5. My only regret is that the helmet seems big on him. I would like a little bit tighter fit, but I am still very happy with the final product. "

MegaBuster
"This took about 15 - 20 hours. I few less burns and blisters during this build, even though it was much more complex. The tupperware was about $15, LED's/electronics $15. When I finished this ... I was giddy. I thought it looked pretty good for my first ever costume build. All the warm comments from the Destructoid community just drove me on further. "

The Boots
"This was about 6 hours. By this time, I stopped burning myself (Yay!). The only additional cost here was the blue foam, which I think was a couple of dollars at Goodwill."

The Gloves
"This was about 4 hours. "

The Suit
"My wife said she spent about 5 hours on this. Again, can't thank her enough. "

"In closing: When I first started this costume, I was not planning on it being this involved. But the more I got into it, the more excited I got, the deeper it took me. When I made the decision to add the LED's is when it made things more complicated (at least for me). I had to think about how I was going to mount them, where I was going to store the batteries, how I was going to get them to glow. In the end, I really think the LED's made the costume, not just for the coolness factor of it lighting up, but also all the decisions I made because of them." 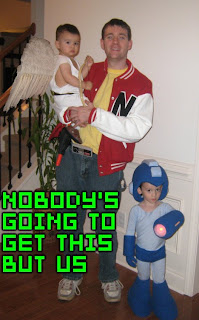 When I got done with the costume, and fitted it on our son for the first time ... my wife just looked at me and started laughing. I asked her what she was laughing at, her response: "Your like a little boy Christmas morning getting ready to open all your presents, with this silly grin plastered on your face." I couldn't help it ... I was just so happy, and that described my joy perfectly. And it also worked as a cool thing for me and my son to do together. He really enjoyed helping me (even if it was simple stuff like throwing away some trash). As we were taking pictures my wife said to our son, "Move the gun up a little" to which my son replied, "No! Its a Mega Buster!" I could not have been prouder! "

Check out cranieum's gallery for more pics of the finished costume!
Posted by Protodude at 2:00 AM