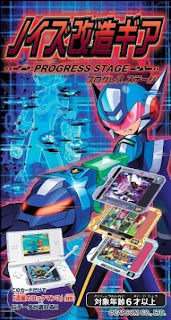 One of the highlights of the SSR3 experience is the "Noise Modification Gear", special Cards used to further enhance one's skills and abilities.

"The example of a Noised Card given is called Wheelz Noise. Like other Noised Cards, such as the cards Burai Noise and Gemini Spark Noise, it comes with a sub-class, in this case, Five of Diamonds. It is safe to guess that the limits on the Noised Cards will be one card per sub-class (Ace, Heart, Club, Diamond, Shooting Star Joker). Noised cards specifically modify Rockman in his normal state as well as the Noise Changes and Merge Noises. The Wheelz Noise card will change Rockman's normal charged shot to Giza Wheel." "The example of a White Card is the same one we got before: White Card 01. White cards work similar to the Wave Command Cards of the previous game's Touch Command System. They are installed onto your profile by use of a Blank Card in game. You can have as many White cards installed as you have Blank Cards available. White Card 01 has an electric theme. Selecting it in the game will activate a roulette between four cards. In this case, the cards are Plasma Gun, Stealth Laser 2, Mummy Hand 1, and Inazuma Head 1. "

"The final example is that of a Rezon Card. Rezon Cards specifically modify the Finalized Noise Changes, Black Ace or Red Joker, effectively allowing for customization of your ultimate form. This particular card, Ultimate Wood Master will partially activate upon achieving a Finalized Noise Change. When Rockman Finalizes, the stage will be covered in kusamura/grass panels. In addition, if the Rezon Card is active, all Wood Cards in your equipped folder will gain +3 Attack Stars. There is probably a different Rezon card that will grant Wood Body to the Finalized Noise Change, allowing a player to further benefit from the field change." "What should be noted is that the artwork for the card features four wood type bosses. Three of them are bosses from previous games: Goat Kung-Fu, Ophiuchus Queen, and Condor Geograph There is a new boss who appears to be a moss-statue monster with a cannon in its mouth. Something to note is that it bears the Club motif, similar to the Spade motif found on Spade Magnets, meaning that this new boss will be one of the four bosses affected by Illegal Cards given by Queentia and Jack." 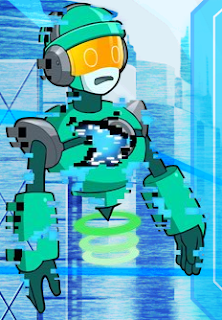 In related SSR3 news, the official site has seen some updates. Nothing truly significant but noteworthy nonetheless: Two wallpapers have been added: One of a peeved Luna and the other of Rockman and the Noise Changes.

The Satellite Server's welcome Wizard has apparently...died. Yes died. In his place is a sole Denpa Kun. Rest in peace my man. We hardly new you.
Posted by Protodude at 2:43 AM