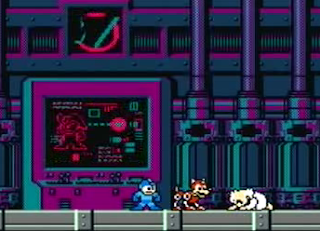 The announcement of Fake Man certainly struck a cord with some fans. Many had hoped Forte would make his triumphant return in Rockman 9, but things turned out otherwise. Beyond the appearance of his schematics during the closing moments of the game (right), Forte was virtually absent from the title. What gives?

Maybe Capcom felt his presence would take away from the retro/NES/Famicom vibe of the game? Or maybe they simply could not figure out a way to properly include him in the plot without his appearance feeling "forced."

Regardless, Forte sat this one out.

Did a lack of Forte tick you off? Do you even care? Discuss!
Posted by Protodude at 10:06 PM