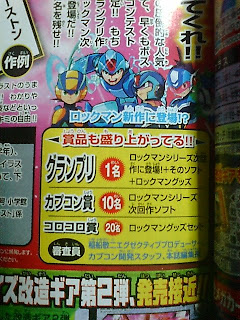 Nothing to get overly excited about, but we have a small update regarding Coro Coro Comic's upcoming character design contest. According to Fireman, contestants actually do have something to base their designs off of.

A sample character named "Ghoston," created by Ryo Takamisaki (of EXE/SSR comic fame) was displayed in the issue. No pictures at that moment, but the character is described as a "skeletal creature wrapped in ghost-like covering, with floating hands, a hat and its head is in its stomach."

Is this an indication as to what kind of character(s) to expect from this mysterious Rockman game? I have no idea.

News Credit: The MegaMan Network
Posted by Protodude at 12:03 AM