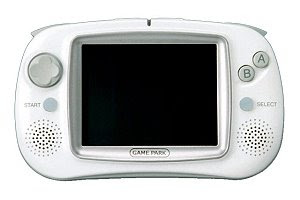 Ever heard of the GP32 (Game Park 32) handheld system? No? I'm not surprised. This highly obscure system, hailing from South Korea, was slated to host an official, "enhanced port" of Rockman X5. According to their official website, the port was scheduled for a Q1 2002 release, however nothing ever became of it.

For its time, the GP32 sported some very interesting features such as wireless multiplayer, USB connectivity, MP3 support, rewritable Smart Cards (used for homebrew dev.) and a backlit screen. Indeed, the GP32 was a hefty competitor for the GBA; it's no wonder Capcom felt the need to release X5 on the system.

In the end, Capcom (along with several other developers) stopped supporting the system most likely in favor of developing software for the GBA. Today, the GP32 remains a popular system amongst the homebrew community with countless new applications appearing every so often.
Posted by Protodude at 4:00 PM