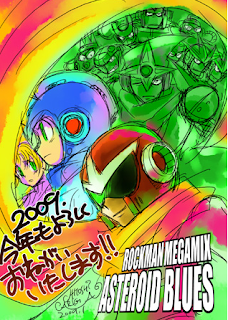 New Years postcards are a big thing in the east, it's not uncommon for game developers and artists to create "nengajou" for their devoted fans. Thus, to commemorate the new year, Hitoshi Ariga has crafted a nifty negajou card entitled "Asteroid Blues" for all his viewers. How nice!

Coinciding the new year card was a small status update concerning Megamix volume 4: Ariga notes he's working very hard on the comic's completion, apologizing for not being able to speak about it more directly. Apparently, Ariga is not allowed to make any sort of announcements, instead all announcements shall come from his publisher in the near future. Regardless, he's anticipating the comic's release later this year.