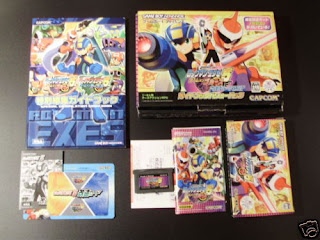 Currently up for buyout on ebay is limited edition Rockman EXE 5 Team of Blues deluxe set, a bit of a rarity as very few copies were produced (Team of Colonel DX set is just as rare).

The set comes in an oversize GBA box containing a copy of Team of Blues, a mini strategy guide and the rare E+Card Saito Hikari. Best of all, this particular buyout is priced at $30 (+$11 S&H), much cheaper than its original price between $50=$60.

Not quite as interesting as the deluxe versions of EXE 6, but it's still worthy of a spot on your mantle.
Posted by Protodude at 12:30 AM