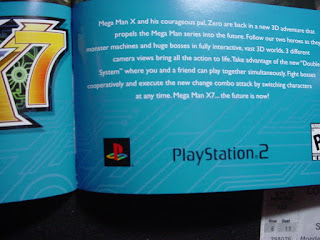 Upon Rockman X7's unveiling at E3 2003, word of a two- player cooperative mode dubbed the "Double Hero system," began popping up throughout the internet. The system, as described in Capcom USA's press release (pictured) stated that "you and a friend can play together simultaneously. Fight bosses cooperatively and execute the new change combo attack by switching characters at any time."

Contrary to countless websites' description of the game (such as GameStop), two player cooperative play was not present in the retail version. This came as a disappointment to many as they had hoped RMX7 would finally achieve the lifelong fan dream of a "true two player" Rockman game. So, What happened?

It is a common belief that the two player cooperative aspect of the Double Hero system was a mistranslation/misinterpretation on Capcom USA's part. In actuality, the Double Hero system called for the ability to create a team of two Hunters who could be switched in/out of gameplay upon the player's whim to assess various situations.

Proof of a mistranslation/misinterpretation can be found within RMX7's various press assets. Not once was there ever a screenshot or footage depicting two characters simultaneously on screen, not even at E3 2003. In fact, the only branch of Capcom to ever spout word of cooperative play was Capcom USA. Still, it's very possible a cooperative mode was designed but never implemented in the final version. Capcom USA's information might have been based upon an early build of X7 featuring such a mode, however this is pure speculation.

Who knows, maybe we'll one day see a game that fulfills the intentions of Capcom USA's Double Hero system
Posted by Protodude at 2:50 PM