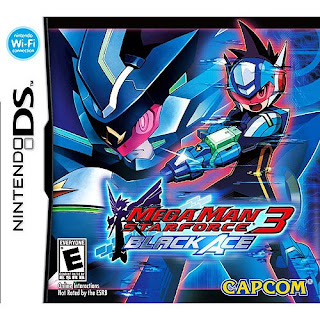 Wal-Mart's online store has updated their MMSF3 Black Ace pre-order page to include the game's box Art. Spiffy, isn't it? Pretty much identical to its Japanese counterpart -- no complaints here! Notably, Red Joker's box art is nowhere to be seen.

Thanks for the tip Kyouya Garyuu!

UPDATE: The ESRB has officially added a product description:

Rating summary: This is a role-playing action game featuring characters and elements from the Mega Man franchise. Characters use "battle cards" to defeat robots/aliens on 3D fields in turn-based combat. When characters are hit, a quick burst of light signifies damage. During one cutscene, a boy and a girl are being held prisoner, restrained by a laser-like force field. In another scene, a character uses the derogatory word scumbags to describe the enemies.

Since when is "scumbag" a derogatory term?
Posted by Protodude at 12:00 PM