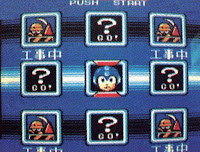 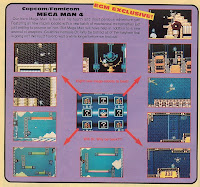 -Middle image: a beta stage select screen. Similar to the MM7 prototype, only four out of the eight stages appear to be playable in this build. The boss tiles are vastly different from the final build, that and the Dr. Cossack emblem remains absent from the center tile, replaced by Mega Man's mug--a possible place holder.

Right image, multiple screens:
-Ring Man's stage layout looks a bit different. Also, the Wall Blasters in the bottom left screen appear black and white. In the final, they are red and white.

-It might be the quality of the screen shots, but the rain in Toad Man's stage appears thicker than the final.

-The backgrounds in Bright Man's stage are completely different, that and the spikes below the Hopper appear bland and generic when compared to the final.

Well, that's just about everything I could find. See something I missed?
Posted by Protodude at 1:11 PM