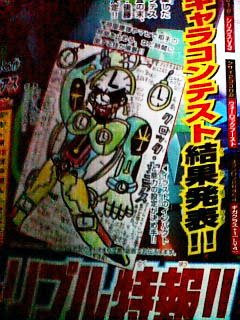 MMN local, Fireman, managed to acquire the May issue of Coro Coro Comics, the same issue that revealed the winning boss design "Clock Genius." According to him, the issue had no additional details about the new game and incidentally, neither did the preview for the next issue (June).

Although the designs were not shown, the issue did list names of the other boss contest entrants. As luck would have it, only one foreign entrant made the cut: Lou Smith from the US! What a honor that must be, congrats man!

News Credit: Mega Man Network
Posted by Protodude at 12:00 AM