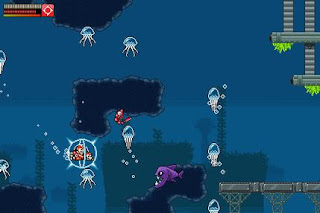 Mega Man Rush Marine is coming down the pike, a brand new side scrolling shooter for mobile platforms. Which mobile platform? Unfortunately, Capcom's fact sheet didn't specify, but if the the screenshots are any indication, Rush Marine might be headed to Apple's iPhone.

According to 1Ups Jeremy Parish, the screenshots for the title run 480 x 320 in size, the precise resolution of an iPhone/iPod touch screen.

"I couldn't help but notice that the resolution on these Mega Man: Rush Marine screens I found over at Siliconera just happen to be sized at 480x320. By a funny coincidence, that's the exact resolution of the iPhone's screen."

"In case you didn't know, the iPhone has some pretty solid shooters available for it. Rush Marine seems like a perfect fit, don't you think? Its retro-favored graphics (taken largely, though not entirely, from Mega Man 3) would be super-crisp on the iPhone's screen. Plus, unlike all your crazy Japan-only superphones, the iPhone is available to just about everyone in the world... and for those who can't own one, there's always the iPod Touch."

An iPhone release sounds likely, but bear in mind that the screenshots for RM are conceptual images according to Capcom's press room; it might not reflect the final product.

Whatever the case, Capcom's mobile group will be at E3, so expect to hear more Rush Marine info within the week.
Posted by Protodude at 12:00 AM