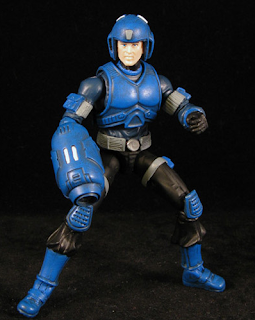 I must admit that I'm a little perplexed with the collectible action figure scene, but nevertheless, I have the utmost respect for those who take it upon themselves to craft figures of their very own such as this unlikely crossover between G.I Joe and....Mega Man?

Currently up for bidding on ebay is a custom made G.I Joe action figure forged in the demeanor of a realistic Mega Man. Wicked, no?

"This auction is for a custom made 3 ¾” Rock (Megaman for all intents and purposes) with removable helmet, armor, arm cannon, and blast beam. He has all the regular articulation of a 25th Anniversary GI Joe figure and will fit right in with your current collection. "

Oh, it gets better. The seller even included a little backstory for the character:

"With all the crazy things happening recently such as time-traveling engineers and undead Nazi scientists, we were prepared when this unknown individual came tumbling through the experimental temporal aperture that Warzone created in an attempt to contact his own timeline. Good spirited and calling himself 'Rock' this new recruit appeared to be a normal human...that is until his first mission where he warped in on a beam of light and his arm turned into a cannon capable of blowing a hole through a Cobra Rattler. Whatever he is, Rock just made it from soldier to human tank, that's quite a promotion!"

Bidding begins at, believe it or not, a mere penny ($5.00 shipping). You can view the complete auction (with more pictures) here.

Thanks, The Shadow.
Posted by Protodude at 12:00 AM