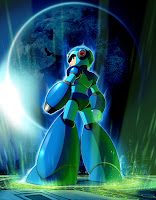 Overshadowed by the big Mega Man Legends 3 unveiling, NeoWiz opened up an official blog for Rockman Online. Scant on gameplay specifics or release date info, the page did however reveal some interesting info about playable character classes with a handful of new artwork thrown into the mix, too. You can read up on all of that here but today we're taking a quick look at the game's plot.


----
According to the blog (with a translation and summary provided by reader KidWillow), Rockman Online takes place in the far future. Rockman X, Zero, and the rest of the X series cast have long died off; so too, has the looming threat of the Sigma Virus and its product, the Irregulars (Mavericks).

Believing the threat of Irregulars are gone for good, society is taken by surprise one day when a large number of Irregulars began to wreak havoc out of the blue. In response, the UCA (The United Continent Association), initiates the production of copies of X, Zero and Duo, among other heroes, to combat the rampant Irregulars. The UCA went so far as to embed the DNA Souls of the original heroes onto a chip housed within the copy bodies to further enhance their abilities in an effort to make them as legitimate as possible.

The Irregulars associated with Rockman Online are actually rebuilt and heavily customized versions of Robot Masters and Irregulars from the past, produced in a similar manner to the X, Zero and Duo copies. Coupling the above info with the other day's report, we can assume these Irregulars will go on to form the basis of the URA organization (The Ultimate Reploid Association). The URA is at constant war with the UCA with battles waging on the small to large, global scale.

What isn't known at this point is just how Dr. Light and Dr. Wily returned. Artwork on the game's blog depicts the characters associated with the UCA/URA respectively, leading to the assumption that each doctor spearhead's their respective organization. Their depiction could also be looked upon as a sort of visual representation of "good vs. evil" but we don't know for sure.

Nevertheless, it's a fairly interesting plot. I doubt it's canon but hey, I'm not Capcom.

More RMO details are expected to come from the blog so check back every now and then.
Posted by Protodude at 5:11 PM