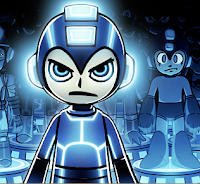 Probably the second biggest gaming expo this year (next to E3), Tokyo Game Show 2010 officially kicks off in a matter of hours in Japan. Despite no new Mega Man games being unveiled during today's pre-show, we're looking forward to what's in store Mega Man Universe-wise in that we'll be learning a lot more about the game. As previously reported, MMU is publicly playable on the showroom floor so in addition to official assets like screenshots and such, expect to see a lot of amateur shaky cam footage of the game in action.

Another thing of interest to be on the watch for is the Mega Man Universe Special Stage show taking place on September 18. As with past stage shows, Capcom will use this opportunity to talk a little about the game and maybe demonstrate it for the press. I don't want to get anyone's hopes up, but if I'm not mistaken, a couple MM-related stage shows in the past did play host to a slew of announcements, new games included.

As per usual, I will do my best to keep you covered with news as it hits. Admittedly, tomorrow is an extremely busy day IRL. If you're wanting to stay up to date, keep an eye out on Capcom Unity and our friends over at The Mega Man Network, too!