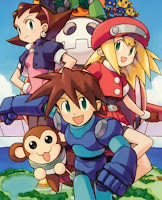 Remember our enigmatic friend "The Shadow"? The self proclaimed inside source that leaked several accurate Mega Man 9 details prior to the game's official announcement? Well he's at it again, and this time he brings a very interesting bit of news that's sure to please many.

Hot on the heels of all that "fans will be happy soon" teasing by former Capcom staff member Hideki Kamiya, The Shadow sends word that a Mega Man Legends sequel is indeed currently in development at Capcom. The project is "very tight lipped" at the moment and as such, he cannot reveal further details at this time. However, official news on the project is expected to surface after Capcom shifts their focus away from Mega Man Universe. No time frame was disclosed.

Further, The Shadow could not confirm if the title of the game is actually "Mega Man Legends 3" because the project has no working name at this point. Nevertheless, it is considered to be the next entry in the series.

Despite The Shadow's track record, it's best to take this with a grain of salt. "Hope for the best, expect the worst", as they say. I'll be keeping you posted on any new developments should they arise.

Update: Many are requesting a source. The source is The Shadow himself. We've been in contact via e-mail for over a year and my curiosity about the Kamiya tweets got me thinking if he knew something. I shot him a message and a few hours later, we have the above tidbit.
Posted by Protodude at 11:32 PM