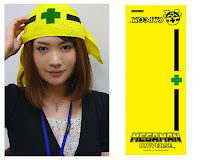 Capcom tonight has confirmed that Mega Man Universe will be one of the many playable games on the Tokyo Game Show floor next week. This marks the first time the game will be playable by the public and for those who give the game a spin, you'll be presented with one of these cool 'Metowels' (pictured) -- a towel made to look like the hard hats worn by the ever popular Mettools. Pretty sweet, no? What's a gaming convention without some sort of nifty piece of Mega Man swag?

As previously reported, we'll be learning a lot more about Mega Man Universe at TGS. Naturally, expect to see a plethora of related videos, screens and other media to surface throughout the big week. I'll be keeping a close eye out for all the goodies, and if you happen to be attending, be sure to send us some impressions of the game (video footage would be nice, too).

Not a fan of MMU? Keep an eye out on Capcom Japan's TGS homepage where the company's lineup is ever changing with new titles  -- who knows, perhaps we'll hear about Inafune's 'oft-requested' game.

Source: Andriasang (thanks, Thomas)
Posted by Protodude at 10:12 PM