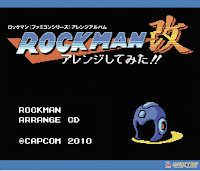 A slew of Capcom related Tokyo Game Show material was unveiled tonight, and while there wasn't any mention of Rockman games at the show, Capcom is planning to roll out a new arrange album exclusive to TGS.

Entitled Rockman Kai, the CD is being produced by Tetsu x Neko, who previously worked on the famed "Can't Beat Air Man" song and album. Not much else about the disc is known currently, however according to Capcom's TGS goods page, the soundtrack includes a DVD and a special booklet of some sort. Naturally, more details will trickle out as TGS draws closer.

On the lack of the presence of a Rockman game, Capcom (and most developers) are known to add titles to their TGS lineup as time goes by, so it's not entirely a lost cause. The least we can expect from TGS is Mega Man Universe, but you never know..

UPDATE: Some major updates coming from The Mega Man Network. I'm a bit short on time at the moment so here's a good ol' copy/paste of the new details, found after the jump...

A new product listing has appeared on e-Capcom for the Rockman soundtrack “Rockman Kai: Arrange Shitemita!!” (roughly Rockman Modified: Let’s Arrange It!!). The album will release various Rockman tracks arranged by different musicians, including Team Nekocan of Airman ga Taosenai fame. In fact, Airman ga Taosenai will be a bonus track on the disc. Here is the complete track list:

Additionally, the album will feature Team Nekocan’s three Rockman-releated singles: Can’t Beat Airman, These Guys Are Supposed to Help? and Won’t Sleep ‘Til Cleared! The album will ALSO come with a DVD with movies for the three Team Nekocan bonus tracks, as well as a medley of the main tracks. This amazing album will release on October 20th for ¥3,150 with tax (roughly $37 US). A pretty interesting selection for a new album!

After a little snooping around, I found a preview reel for the soundtrack has been put up (for a week, oddly enough). You can take a listen in the video here, although it is a 20 minute long demo.
Posted by Protodude at 11:50 PM