Capcom and Neowiz rolled out two brand new illustrations for Rockman Online tonight; one touts the return of fan favorite character Duo (of Mega Man 8 fame), while the other unveils "Fortress Gaia", the area where most of RMO's gameplay will be carried out. Images and details below! 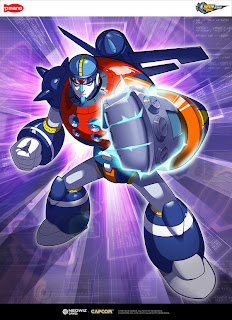 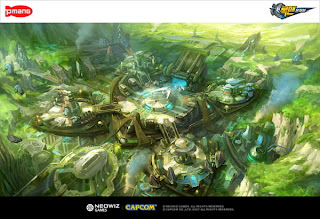 According to a report put out by Stoo.com, Gaia is a large military facility that houses various areas where "battles will unfold." The base is said to contain stages set in a large forest and a city monorail, among other locations. What's more, the report also says Gaia will implement a differentiated play experience based on the player. In a nutshell, it sounds as if Gaia will act as the hub-world where players can meet up and embark on quests, taking place within stages. Educated guess right there, so don't take my word for it.

As for Duo, the article doesn't say specifically if he's playable or not, merely he'll be making an appearance alongside other key characters. Duo was chosen to appear in the game because, like X and Zero, is very popular among fans.

Unfortunately we're left with no new details on actual gameplay, again. With the introduction of Gaia, however, I think we're not too far away from that point. Stay tuned!