The Tale of the Rockman.EXE Beta Version 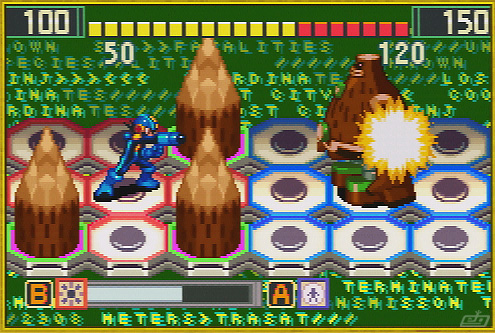 You've seen the video and the pictures. And now, it's time to hear the "untold story" behind the Rockman.EXE beta version. Back in the heydays of U-Capcom, EXE series planners Masakazu Eguchi and Masahiro Yasuma let Japanese fans in on the EXE that never was. Courtesy of The Mega Man Network:

"Reading these comments from the fans, I somehow get a strangely nostalgic feeling. Because of that I’ll regale the inside story to days of the first Battle Network’s development and such.

When the game was being produced we created something like an experimental demo in the development’s early stages. Although we also made such a ROM for Battle Network too, when I think back the contents of it were pretty strange.

First, when the game started you were already in school for some reason. Yai and Dex were wandering about, and strangely Chaud was there, too. (Which reminds me, I believe Chaud was originally planned to attend the same school.) Once you talked to everyone, a sort of “Oh no, someone broke into the network!” event occurred.

What the… the one behind the incident is WoodMan! And moreover, this WoodMan is a totally evil character! And besides that, it’s a rather petty goal, no? In contrast to that WoodMan is MegaMan who stands in opposition with a strong sense of justice; certainly a lovable hero indeed. And, upon beating WoodMan, the game was over!

Incidentally, a screenshot of the battle with WoodMan from that time can be found on page 129 of the “Rockman EXE 3 Ultimate Capture SP” guide published by Shogakukan.

I’d like to try playing it after all this time, just to see what I’d think."