Did the PS3 Influence the Link PET Design? 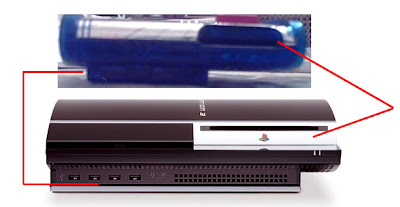 Ever notice the design similarities between Sony's PlayStation 3 and Rockman EXE 6's "Link PET EX?" I sure did...

When you put both devices side by side (horizontally), you'll notice a couple similarities:

-Both are convexed in shape, the bodies resting upon a "base:" The PET's being the battery compartment, the PS3's being the optional output sources (USB ports, HDMI port, etc.)

-Both the PS3 and the PET have a cutaway for the disc slot/Battle Chip slot, conveniently situated in the far right side of the convex.

The Link PET EX was unveiled in August of 2005, three months after the PS3's official revealing at E3. Coincidence? Maybe...maybe not.
Posted by Protodude at 1:00 PM