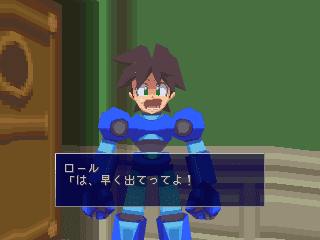 When a game is translated, many changes are made to meet various protocols and standards, particularly to meet a desired ESRB or OFLC rating. DASH's localization was no exception as it contained a meager amount of edits, cuts and censorship:

1.) In Mega Man Legends, Rock innocently walks in on Roll while she's changing, becoming deathly frightened by what many presume is full frontal nudity. Upon leaving her room, Rock apologizes and goes about the rest of his day.

What Was Cut? If you've managed to collect all the required items to gain Roll's affection in DASH, Rock, upon leaving Roll's room, will strike a "heroic pose."

2.) In Uptown, Rock comes across a young woman outside of the "YAG Computer School" who states that she wants to "go here and learn how to make really cool games like 'Resident Evil!' "

What Was Cut? In Rockman DASH, the girl's dialogue remains the same, the only difference being is that she doesn't mention Resident Evil. Instead, she gives out a phone number belonging to a real life game design school in Japan, the Yoyogi Animation University. 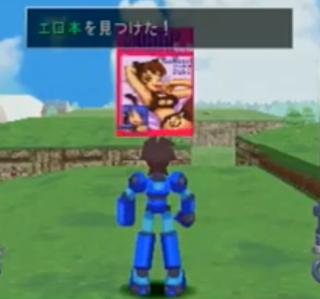 3.) One of the many side quest in the game is to obtain a innocent comic book for Jim and his gang.

4.) Finally, we have the array of animal abuse scenes here, which were obviously cut to avoid any sort of controversy. Strangely, Rock can still punt the guard dogs in Old City in the later half of the game. Why? It's believed that, since these particular dogs can actually cause damage to you, then it's "acceptable" to hit them back.