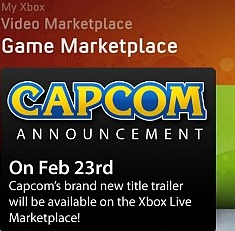 Capcom is teasing a brand new game for the Xbox 360, set to be announced February 23rd in the form of a trailer on Xbox Live Marketplace.

Whether this pertains to Mega Man or not is unknown at this time, though a little speculation never hurts.