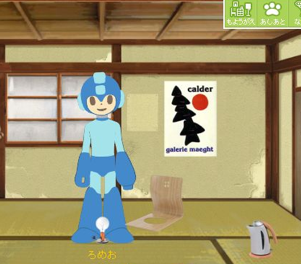 Both Rock and Roll are fully intractable NPCs, offering little conversations about the happenings of Daletto World and giving away items every now and then. Apparently, during the week of Rockman 9's release, the two gave out a special "virtual t-shirts" featuring an 8-bit Rockman on the front and back. Awww.

Daletto World sure seems interesting, though I doubt we'll see something like this on our shores. If you've played Second Life, you're not missing much apparently.
Posted by Protodude at 8:50 PM