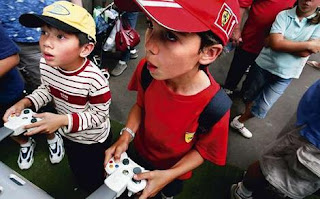 I know I'm not the only one out there wishing for a faithful co-operative/multiplayer Rockman title. Thankfully, this wish may one day be fulfilled: According to an interview with Capcom's own Chris Kramer regarding Resident Evil 5, Co-op game play will be a big feature in future Capcom games:

"Co-Optimus: Does Capcom see co-op as the future of gaming and plan to include co-op in future RE games? Would that hinge on the success of RE5?

Chris Kramer: You’re definitely going to see a much larger emphasis on co-op in many Capcom titles over the next year or two."

Who knows, maybe the inevitable Rockman 10 will have some form of co-op?

News Credit: Jim
Posted by Protodude at 12:00 AM