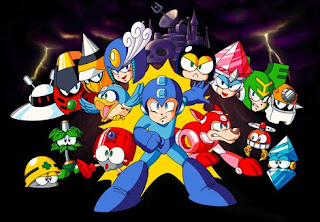 What a honor: Mega Man 9, the little 8-bit game that could, cleaned up Nintendo Power's WiiWare awards, beating out the likes of World of Goo, Tetris Party, Lost Winds, and many more "AAA" WiiWare titles:

"The WiiWare service had a great start, with a steady output of quality releases that included some of the year’s best games. Mega Man 9 tops them all because, in addition to its fun and challenging gameplay, the title is a fantastic example of the breadth of game styles made possible by direct download– the game would have been considered too risky to ever sell in stores. Here’s hoping more creative ideas are given a chance thanks to Mega Man 9’s success."

But wait! The acclaim doesn't stop there! Mega Man 9 was also deemed the "best shooter/action game" of the year and nominated for "overall game of the year."

It's definitely great to see MM9 getting the recognition is deserved.

News Credit: The Mega Man Network
Posted by Protodude at 12:30 AM