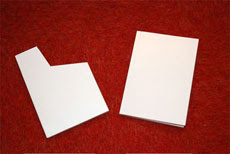 Back in 2007, it was reported that Chronicle Books was working on a Mega Man 20th anniversary book said to include concept artwork, developer commentary, and other interesting tidbits. The best part? The book was going to come packed in a mock NES sleeve (pictured).

The project, headed by I-Am-8-bit editor Matt Robinson, was slated to release in the fall of 2008--well here we are in February 2009...what happened?

I've done some detective work and well, have com up empty handed. What I do know for a fact is this book is in no way related to R20, regardless of its scheduled localization.

In any case, there's been no news about the book since its announcement post, which has mysteriously disappeared. Is this an indication of the book's cancellation? Maybe, or the project might just be on hold...

Hope to see this one day.
Posted by Protodude at 11:50 PM