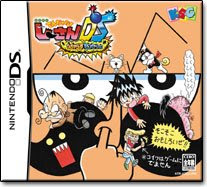 Highly obscure Nintendo DS game, "Dangerous Oldman," (based on the comic of the same name) features a slew of Coro Coro Comic character cameos including our very own Rockman.EXE

Dangerous Oldman plays an awful lot like the Wario Ware games, filled to the brim with zany mini games that make no sense whatsoever (50 mini games to be exact). In fact, one mini game requires you to tap a series of buttons in order to make the titular character fart...yeah. (You can demo this particular mini game here. Fourth button up top, click on DS)

Rockman.EXE is said to be a prominent character in the game, though during my limited play through, I've yet to encounter him. It's possible his appearance is limited to a mini game of his very own, or an appearance in one of the many backgrounds.

As a trade off, Dangerous Oldman and friends cameoed in a short cartoon that played before Rockman.EXE: Program of Light and Darkness theatrical featurette.
Posted by Protodude at 5:13 PM