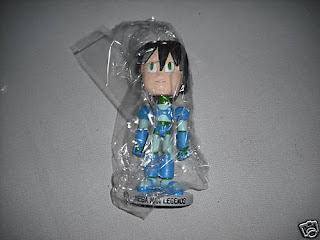 It might not look like much, but this MegaMan Volnutt bobble head is a bit of a rarity.

Back in 2004, during the 15th anniversary blitz, a series of MM bobble heads were produced and distributed to select stores throughout North America (picked mine up at Toys R Us years ago).

Oddly, the bobble heads weren't sold on store shelves, rather you would have to ask an employee for it as they were located in the "back room." (as is the case of TRU) Some video game specialty stores such Game Crazy, gave away the bobble heads as pre-order items for the then up and coming MegaMan games.