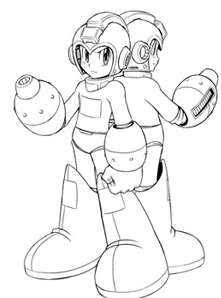 Japanese online shop Fukkan is taking preorders for a mysterious "Rockman Gigamix" comic, described as having some sort of relation to Hitoshi Ariga, author of the Rockman Megamix comic series. Ariga's personal blog seems to indicate that Gigamix will be a follow up to Megamix.

Volume 1 of Gigamix will ship in late July, followed by volume 2 in late December. Both volumes will retail for 1,680 Yen.

In other Ariga news, Fukkan has launched a special giveaway in which the first 500 copies of the Megamix reprints will come with a limited edition postcard. Even better, 10 books will be eligible to receive an autograph by Ariga himself. How cool is that?
Posted by Protodude at 1:29 PM