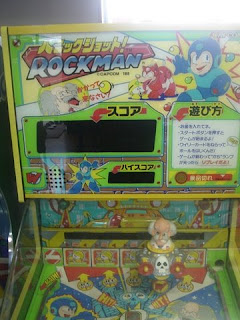 Not much is known about this contraption other than the facts that it is a) licensed by Capcom and b) produced in 1993.

Based on this lone picture, it appears the objective is to hit the back row of Mettool icons to score points while a looming Dr. Wily moves on a fixed path to block your shots. Yup, typical Wily antics.

Notably, this isn't the only time Rockman graced the good game of pinball: Japanese mobile phones were treated to Rockman Pinball in 2004 followed by a European version some time after.

Posted by Protodude at 1:15 PM