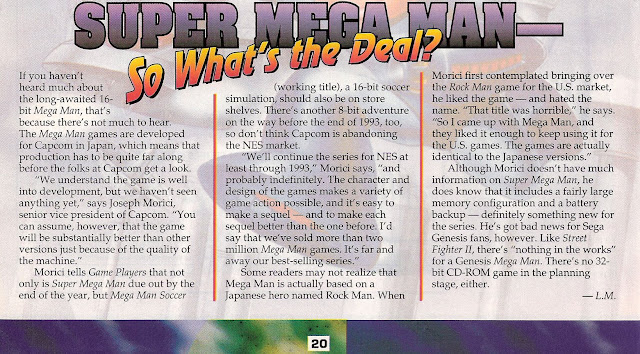 Back before Mega Man X came to be known as Mega Man X, the game assumed the title of "Super Mega Man." Game Players magazine, in March of '93, featured an interview with Capcom's former senior VP, Joeseph Morici where he talked a little about Super Mega Man among other topics of interest (such as why he renamed 'Rockman' to 'Mega Man'). The scan below.

What I found particularly interesting was the reference to Super Mega Man's "battery backup" save feature, which remains completely absent in the final product and its subsequent SNES sequels. Capcom finally took advantage of this feature with the Super Famicom version of Rockman & Forte in '98.
Posted by Protodude at 2:12 PM