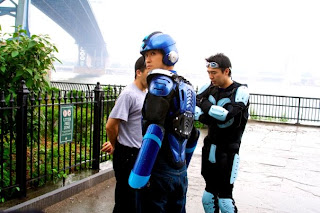 Eddie Lebron, director of the upcoming live action Mega Man fan film, sat down to answer a handful of user submitted. A small sample of the topics below:

Q1.) My question is, will Rush be in the movie or Items 1-3 from MM2 or something like that?

A1.) Rush will not be in the film. His presence was saved for the possible sequel. Those items are also being saved for the future!

Q1.) I want to ask when you say all the bosses will copy cat mega man and the yellow devil(big yellow thing) be in the film as well? Just to ask.?

A1.) I once said every boss of the first game will be in the film so… you be the judge of that answer =).

Q10.) . Will Proto Man’s whistle theme be included in the film.Proto Man is obviously in the movie, and it simply won’t be the same without the whistle. And also, where will the whistle be placed? Will you use it as music that lays over the ending of the film and carries over into the credits as a BGM?

A10.) The whistle shall be. Where it will be placed is a surprise!

More questions and answers here.
Posted by Protodude at 12:00 AM