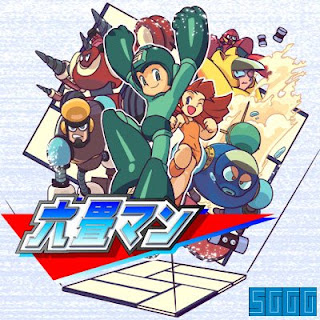 Over the weekend, a friend of mine introduced me to a little known Dreamcast game by the name of Segagaga, aka "SGGG."

The year is 2025, and Sega is in pickle. The company is losing money and market share to the likes of the sinister Dogma Corporation. (What? Sega in financial trouble? Unthinkable!)

Desperate for a help, the company concocts a brilliant scheme of turning over the entire operation to a teenage boy. With the fate of the company resting on his shoulders, "Tarou Sega" sets out to increase the company's market share to 100% within the span of three years. How? By defeating rival game producers in typical RPG fashion.

Throughout the course of the game, Tarou is able to "produce" games for Sega, some of which have no relation to Sega but bear a semblance to games featured on the Sony Playstation, Sega's biggest contender at the time. One such title is Rokujoman, a reference to--you guessed it, Rockman. Apparently the name "Rokujoman" is a pun on Rockman, with "rokujo" meaning an "arrangement of tatami mats." Yeah, pretty bizarre.

While many of the games created within SGGG can be played, Rokujoman cannot, it's limited to artwork only (pictured). As such, one is left only to imagine what kind of hilarity the game would have brought us.

For more info about SGGG, read up on Hard Core 101's writeup here.
Posted by Protodude at 11:00 AM