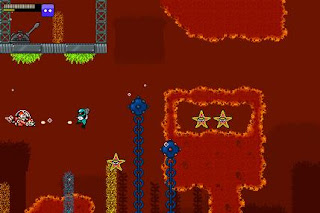 "Take the plunge with Mega Man® and his shape-shifting robot dog, Rush in this original side scrolling shooter set in the deep blue sea. In the year 20XX Dr. Wily sends his robot minions to the seabed in order to drill for oil causing earthquakes and destruction to the surrounding islands. Only Mega Man and the newly submersible Rush Marine have any hope of stopping Wily’s nefarious plan.

* Exciting side-scrolling aquatic shooter.
* Explore three aquatic environments including Shallow Water, Volcanic Reef and Deep Water.
* Battle through ten levels and defeat as many robot masters, each with a unique weapon that you can capture and use for good.
* Fight your way through expansive levels teeming with 14 enemies and numerous hazards. "