Funimation Gets Upon A Star? 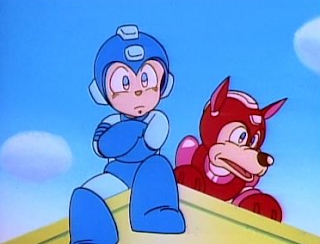 In addition to the possibility of acquiring the Ruby Spears cartoon, word has it that Funimation Entertainment also gained the license to distribute the long out of print Mega Man Upon A Star OVA, originally released by ADV Films in 2002. According to Sylar, a Funimation representative implied the acquisition at Anime Boston. Both the RS cartoon and Upon a Star were said to re-release in late 2010.

Apparently, Funimation has acquired the rights to several ADV properties over the last year, a possible indication that the company is planning on an eventual buy-out of ADV as a whole. The addition of the RS cartoon and the Upon a Star series further fuels that possibility.

Funi has yet to announce such plans via press release. Hope to hear more from this soon.

(edit: added a little clarity)
Posted by Protodude at 12:09 AM