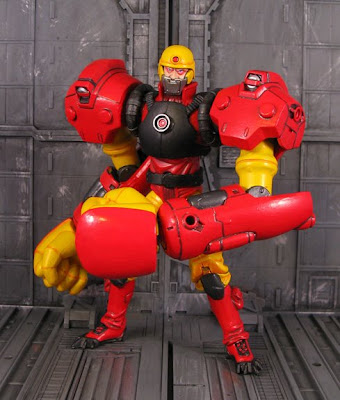 "The attack was sudden and destructive, our MOBAT tanks and Armadillos being tossed about like tin cans. That's when we saw what was doing the damage. It was a single soldier calling himself 'Gutsman'. After a long battle Rock and Protoman were able to drive him into a retreat. We later learned that Zartan had stolen our plans so that Cobra could create dimensional gateways too. Beings known as Repliods were joining their side under control of a mad doctor that Cobra Commander had formed an alliance with...some fellow named Wiley." 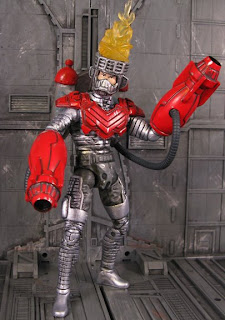 "The phrase 'out of the frying pan and in to the fire' was never more true than with our most recent battle with the mysterious Reploid forces that Cobra and Dr Wiley were mounting against us. This hot-headed fellow gave Barbecue and Blowtorch a hard time with super-heated plasma flames, melting his way through the PIT's defenses. Suddenly there was a burst of light and the slashing of metal, someone cutting through Fireman's armor and sending him running. Whoever saved the day must have been using a sword that burned hotter that that guy's flames. Let's hope he's on our side!"

Unfortunately these guys haven't hit ebay just yet, but when they do, I'll let ya know.