Japanese online store Rakuten has recently opened up a pre-order page for Rockman EXE Operate Shooting Star. Included on the page are new screen shots, one of which being our first look at the battlefield: 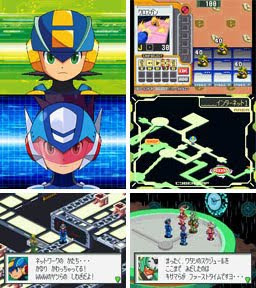 Based on the top right screen shot, battles appear as if they will go unchanged from their appearance in the original game (comparison pic). The custom screen is slightly different from the original with chip selection being cut down to two rows as opposed to three. This was done to accommodate the addition of letter codes below each chip icon; a standard practice since EXE 2 and onwards.

On a completely different note, Rakuten's product description mentions something about the inclusion of mini-games. There's supposedly a six player multiplayer mini game taking place in the "Rockman Star Colosseum." I suppose we'll be hearing more about that soon...
Posted by Protodude at 12:22 PM