Now, I know some of you are getting a little tired of the Jin Saotome custom figure posts, but this one is just too cool not to show off. Sorry. Without further adieu, I give you Tron Bonne and Gustaff: 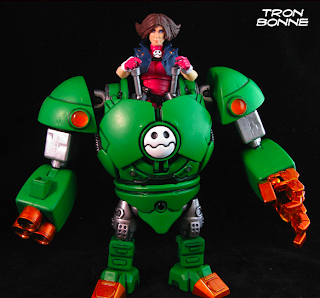 The figures stand at roughly 3 ¾, complete with fully articulated joints. Best of all, the Gustaff can be deconstructed to reflect battle damage.

"From out of nowhere comes Tron, a feisty little lady with a hand for creating her own bizzare mechanical contraptions such as Ride Armors. Rock and Gung Ho encountered her while searching for a band of Air Pirates just outside of the East borders and were assaulted by her robotic helpers. After some long negotiations Miss Bonne begrudgingly agreed to help the Joes fight Wily and Cobra's forces when she realized some alliances are more dangerous than others. We will have to keep a close eye on her for the time being."

You can find the auction for both figures here. Current bid at $31. Happy bidding!

UPDATE: Oh Look, a spiffy Dr. Wily figure. Looks pretty sweet, it's got the crazy hair and everything.
Posted by Protodude at 3:02 PM