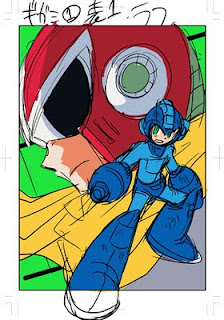 Hitoshi Ariga is gearing up to release a brand new comic anthology by the name of 'Rockman Gigamix.' According to his latest blog post, the book will release on September 30th, 2009 for a "bargain price." Included in his post is a mock-up of the front cover (pictured)

Japanese online store Fukkan has a pre-order page for Gigamix that describes the book as a compilation of Ariga's works from Comic Bom Bom and numerous Kodansha publications. There's even a small hint that the book might contain unreleased comics.

More Gigamix updates are expected to appear on Ariga's official blog.
Posted by Protodude at 1:28 PM