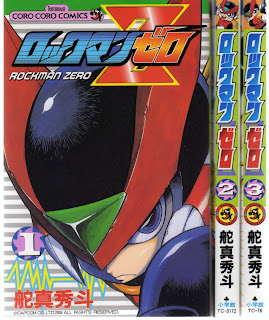 Udon Entertainment is showing off some major love for Mega Man recently. With plans to release the Complete Works art books and Megamix and ZX series manga in the US, these guys are really shaping up to be fans' new best friends. Can it get any better? If you're a fan of Hideto Kajima's Rockman Zero manga, then yes, it can.

The September issue of Nintendo Power brings word that Udon might be planning on publishing the Mega Man Zero manga in North America:

I'm a little iffy on this due to the fact that the blurb didn't mention Udon's ZX manga plans. Is it possible NP meant to say ZX manga instead of Zero?
Posted by Protodude at 3:55 PM